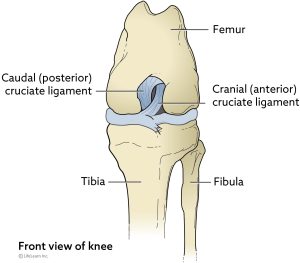 The anterior cruciate ligament (ACL) as it is known in people is also called the cranial cruciate
ligament (CCL) in dogs. The ACL is in the knee also known as the “stifle” in the dog. It prevents
the femur (upper part of the leg) from sliding backwards in relation to the tibia (the lower part
of the leg) every time the dog steps down.

As clinicians, we call this abnormal movement “canial drawr”. We can elicit this movement by
taking the femur in one hand and the tibia in the other and distracting them against one
another. When human doctors are looking for the same injury in us they ask us to sit and then
grab our shin bone (tibia) and pull it forward. In a knee with a ruptured ACL the shin comes
forward. Another indicator we look for is called “tibial thrust”. Tibial thrust involves, locking
the knee in roughly a right angle and then pushing up on the toes. The clinician can feel the
tibia or “shin” push forward when pressure is put on the bottom of the foot. Clinicians may
also say there is a “medial buttress” as well, which is a lump that develops on the inside of the
leg due to instability in the joint. 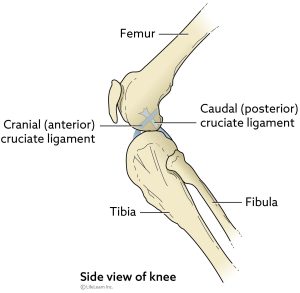 mass. While sedated, xrays of the affected limb can provide additional evidence of disease in
the joint and rule out other disease that can cause lameness. We are not able to see the
ligament in an xray like you can in an MRI but we can see the secondary changes to the joint
that come from an incompetent ACL.

Many of these dogs over time loose muscle mass in the affected limb. Think of the ligament
like a cable. That is how you can have a few fibers of a cable damaged or the entire thing
ruptured. Either way the damage produces inflammation that leads to pain, swelling, stiffness,
reduced function and in a short time arthritis and muscle loss.

Unfortunately, many dogs that injure one limb will go on to have the same injury in the
opposite limb. Some papers suggest 60% will damage the contralateral side. On average if this
is going to happen, we usually seem them back within 18 months with a similar lameness on
the opposite limb.

About the Author Dr. Wes Chapin in his words: I have been caring for dogs with lameness due to partial
or complete rupture of the ACL for over 10 years. I have seen clients decide not to pursue repair and I
have seen the various repairs done. I am not a boarded veterinary surgeon but a veterinarian who
enjoys caring for these dogs and seeing them back to health. This series of posts is to briefly pass on my
experience and opinions on the topic to dog owners needing more information.